It is a misunderstanding to label Tomiki Aikido as only competition. There is more….. 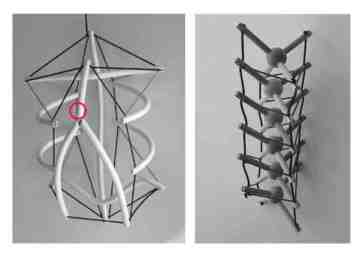 The spine plays an extremely important role in our body as it supports the upper body’s weight, provides posture while allowing for movement and flexibility, and protects the spinal cord.
The muscles attached to the spine are very strong and are used to generate efficient body movement with the help of the arms and/or legs.
Controlling the muscles attached to the spine is not an easy task.

“Use the spine but don’t think about the spine.”

In our bodywork we are using “kyokotsu” as a control centre of the spine. If our attention is to the spine, the spine muscles becomes tensed and our body will act rigid.

Relationship between elbow and kyokotsu

The freedom of the arm is in direct proportion to the use of the elbow. The elbow is controlled by the kyokotsu.
When the kyokotsu moves backwards, the arms will move forward due the activation of the back and shoulder muscles.
The elbow will give direction to the hand when the back and shoulder muscles are activated. To create an efficient movement guided by the elbow a “pattern” must be created in the mind which can be used by the unconscious mind.
Putting the mind on the “specific point” of the elbow will greatly improve the efficiency of using the arm and hand.

Our skeleton is build in 3 sections, one of them is the upper axial skeleton. Some info you can find under “power management”.

In Atemi* Waza the elbow is often used to give direction to reach the target.
On the other hand the target is not always the face or the stomach, but it is also possible targeting by gripping the opponent’s wrist , shoulder or other joint.

* Atemi is a general term in martial arts or Budo/Bujutsu to describe the techniques for punching, thrusting, striking, kicking,…aimed at critical areas of the body.

When working with kyokotsu and koshi, it is advised not to focus on koshi but focusing on kyokotsu.
Why? When you focus on koshi you will have tension on the muscles of the koshi area. This will disturb the concept of yukozo and the result is a lesser mobility and flexibility.

There are 3 kind of kyokotsu movements to practise

Keep the abdomen in a relaxed way.
When doing the exercise correctly, the pelvis will start to move, but don’t put too much attention to it, the pelvis movement is the result of the kyokotsu movement.

Up and down
Push the line between the nipples up. This will stretch the sides of the body. You will feel this on waist level. Lower the sides of the torso.
During the up and down movement, the elbows are moving up and down by the movement of the central body. The pelvis is not moving up, it serves as an anchor from which the upward stretch is done. Visualize your are pulling up and pushing up the kyokotsu.

The movement of both elbows are simultaneous and rotate on the central body axis, like a figure 8 around the kyokotsu.