Controlling “your movements and techniques” are based upon 3 important elements :

1- Kyokotsu control (Kyokotsu is a point on the sternum, about 2 cm above the solar plexus): Kyokotsu is at the core of whole body movement. It initiates the stretch of inner core muscles. You can connect limbs such as arms and legs to the kyokotsu.
2- Rendo (connected movement, interlinking):
Rendo is needed to control movement, from dynamic one to precisely one.
3- To feel the body or Taikan:
To feel is to recognize stimuli happening in your body. And by tracing the sensation of the stimuli, you can create a real control of your movements and techniques. This process is extremely important to liberate the body from preconceptions and conscious thoughts.

These 3 requirements need to be made as 1 package. Even the 3 basic kyokotsu exercises have an element of rendo and taikan.

Connecting elbow(s) to the kyokotsu

As in another article about “Guide, movement and power“, the elbows are movement factors and are a part of the appendicular body system. This system is connected to the axial body system with the kyokotsu as the control center.

Kyokotsu is controlling, via the spine, the upper part of the appendicular system, but also the lower part.

By connecting kyokotsu to the upper and lower part, a complete whole body system will provide the necessary power for movements and techniques.

Exercises to develop the connection between kyokotsu and elbows

Exercises to develop connection are mostly partner exercises. The role of the partner, sometimes called uke, has an important function as a training-partner, not an opponent who is fighting you. We must consider the 3 basic requirements: kyokotsu, rendo and taikan. Without them, the exercises will become a matter of local muscle power or a contest “who is the strongest?”. The role of “uke” is about appropriate resistance and not blocking the action of “tori”.

Basically sotai dosa are exercises to develop connection between elbow and kyokotsu. When the 3 basic requirements are included into sotai dosa, the connection can be made in an early stage of the training. If there are difficulties, isolation of a movement can be used as an exercise to improve the connection. We can consider some elementary movements with the elbows.

Applications in Koryu no kata

In many techniques of koryu no kata, kyokotsu plays an important role to create space or to generate power for locking or throwing. Movements of the kyokotsu need a lot of training. Making the connection between elbow and kyokotsu is the method to create efficient techniques.

Figure-8 kyokotsu exercise is at the core of this technique. The line between the 2 elbows will move synchronic.  Connection between kyokotsu and the front elbow will give the necessary power to lock the wrist of uke without damage. 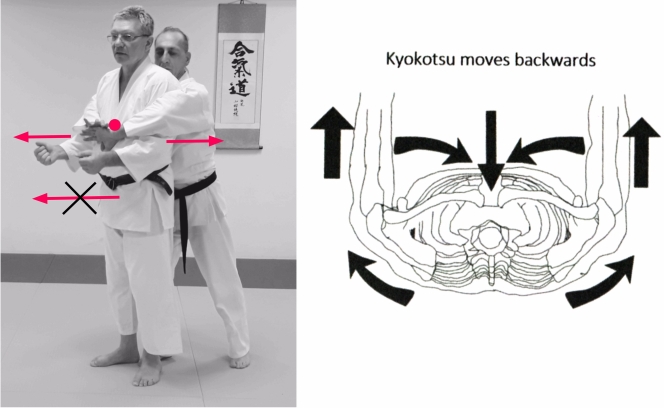 By pulling in kyokotsu, shoulder blades will slide to the outside. When connection is made between kyokotsu and elbows, via shoulderblades, space will be available to move the body and grasping the hand of uke is possible for executing tenkai kote hineri. Don’t push tanden forward without using kyokotsu. The movement of kyokotsu will also have an effect on the koshi.

When uke is resisting your movement, it is not a good idea to use local power from your arm or shoulder to finish a technique.
With kyokotsu control, rendo and taikan, the power of the movement can be changed in any direction easily. The connection between your own elbow(s) and kyokotsu is a necessity.