Movement segments or the concept of “3”

Whole body movement is made of linked movement segments and it is called “rendo”. Although it is not only a physical action, the brain (and its functions) plays also an important role.

When we consider mainly the physical actions, we can divide a movement segment action in 3 parts:

By dividing the human body in 3 major segments we can focus on a smaller part of the body. Each segment can be divided into another 3-part segment. By using this concept of “3”, we can isolate partial movement and focus better on moving the partial segment. By using the skill of rendo or linking skill, whole body movement is created.

The central segment of the human body has 3 parts

The article “guide, movement and power” is related with the concept of  “3”.

Segment of the arm

The power in this segment is a push/pull action. The hand is the leading factor and is a pulling action in the direction of the target, shoulder is the driving factor and is pushing forward. The elbow is transferring the pushing power in coordination with the pull of the hand.

Kyokotsu is controlling the power from koshi/tanden/yōbu and direct the power into the shoulder. The pointing of a finger has a pulling action on the arm, the elbow functions as a transfer for the power in the arm.

Segment of the leg 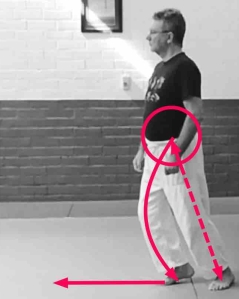 The lower segment (inguinal crease, knee and foot) uses the power of koshi/tanden/yōbu. The power is directed into the front foot, the knee is flexible and is used as a transfer. When the knee is frozen, the power cannot reach the foot. By using the skill of rolling feet, the body will move forward, the back leg is used as a a Nordic** stick for walking.

Technique : The cadences of the arms, legs and body are, rhythmically speaking, similar to those used in normal, vigorous, walking. The range of arm movement regulates the length of the stride. Restricted arm movements will mean a natural restricted pelvic motion and stride length. The longer the pole thrust, the longer the stride and more powerful the swing of the pelvis and upper torso.

The body has more than 3 segments

An example:
The end of the leg segment is the ankle/foot. By looking at the foot we can see a new 3-part segment.

In Tomiki Aikido there are many solo- and partner drills with the purpose to link segments together.

Partner drill
Basically all aikido techniques or waza can be used as a drill to create a specific skill. Creating the skill of rendo is very basic, unfortunately one of the most difficult to perform. Disturbing balance exercises is an ideal method to create whole body movement. It is not only arm movement, but all the segments needs to be linked to create balance disturbing.
Find here an example