In Aikido, many movements have a “coiling”** effect. Mostly we speak about tenshikei, but of course not all body rotation will create tenshikei or coiling power. Some of the body rotations will create angular momentum.

Tenshi is an internal method to create coiling power. Angular momentum is more an external method to create power. Sometimes both systems are overlapping and create a hybrid power – external and internal. To create tenshikei or coiling power, we need space for our winding and unwinding. For angular momentum we use mostly a method of footwork called demawari and hikimawari.

**coiling : arrange or wind (something long and flexible) in a joined sequence of concentric circles or rings.

If you understand “tenshi” or internal body rotation you will understand the concept of coiling power. In fact, this is a basic skill and everybody can learn how to use tenshikei (coiling power). There is of course, as usual, a problem.
We rely on training to improve on our actions, but we have to leave entirely to faith that our system will make the right connections to recruit and align the body internally. Even with hard practice, we can sometimes hit a wall, unable to progress. Some talented people have no problems with controlling the body. Other have to rely on training and creating patterns in the brain. The difficulty is in the stubbornness of the muscles set by bad habits.

Slow movement creates body-skills and by storing them in the subconscious mind, they are available for immediate action when necessary

The kyokotsu exercises are a start to create the skill for using coiling power. It takes at least 2-3 years on a daily basis to feel the existence of coiling power into your body. After this feeling experience, it takes countless training hours to use it for throwing or controlling an opponent in a structured training environment. 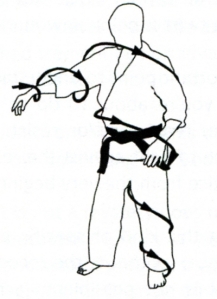 Tenshi is winding the tissue (muscles, tendons, fascia…) around the skeletal bones. Tenshikei is unwinding or releasing the power stored in the tissue.

The fascia is a kind of connective tissue where a lot of power can be stored and released. The fascia network is enveloping the entire body and is an important body network for developing “rendo”.

* The picture is from Akira Hino’s book “Don’t think, listen to the body!”

7-hon no kuzushi as a coiling movement exercise

To understand fully this exercise, you need an understanding of tandoku undo (tegatana dosa). Tegatana dosa solo-exercises give you  the necessary body skills to perform the balance disturbing.
Tandoku undo can be practised by 2 ways

With kyokotsu as the control centre, the coiling power can be stored into the connective tissue around the spine, the torso, arms and legs. The control of the kyokotsu is needed to create an internal movement.

The complete 7-hon no kuzushi (omote & ura) will be covered in a separate article. Here an example to introduce the coiling movement mechanism. 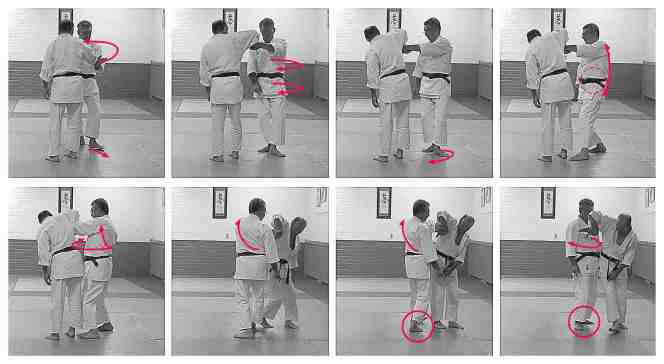 Using “uchi gaeshi” movement (tandoku undo movement), turn upper body slightly in the direction of uchi gaeshi. Put power in the tanden by pushing koshi down and forward. The curve of the lower back becomes more straight. This is necessary for pushing power. Use the waist (yōbu) for more turning. At the end of the turning, you have a lot of “tenshikei” to release.