This is a “beginner’s guide” for referees and judges. It is not complete, but it is a starting point for beginners.

Maybe there are some interpretations different.
Most important is the “spirit of refereeing”

The key points of this training was:

These key points were used as “marks” for judging the performance of Enbu, besides of course the correct waza and the correct order.

Training started with “How to use Flags” after the performance of the competitors.

Next step was how to use the key points during the performance of 17-hon no kata. The idea of how to evaluate “waza” as a referee when performing the techniques.

Some time was spent on questions and answers

Session 1 : The role of the Corner Referee

The 1st training was an introduction to the role of “corner-referee”.
We used tanto strike to create the idea “what is a correct tanto strike”.
Basic information was provided and practised during the training session.
Scoring for waza was not an item for this training.
Some of the participants have some competition experience, and this created a positive feeling amongst the participants.

Our aim is to encourage the use of pure Aikido techniques and the principles of Aikido rather than to submit to competitors natural desire to win at the expenses of showing Tomiki Aikido to have no resemblance to Aikido.

Aikido can be dangerous if applied without control and the competition atmosphere must be kept to a sporting attitude without dampening the enthusiasm of youthful and sometimes not so youthful Aikidoka.

Judges will check sleeve length (minimum 1 fist from own wrist with arm hanging straight down) and trouser lengths not below the ankles as well as cleanliness (body and gi).

Techniques executed with legs being held first will not count, similarly if legs are wrapped round an opponent. But a foot may used to stop the escape so long ass it is not used as a sweep and is kept in contact with the mat.

Techniques executed by means of dragging your opponent down from a static position with superior weight and strength will not count.

Officials are wearing t-shirt or polo-shirt provided by organisers. Trousers are black or dark bleu color.

Organizers have to provide a first aid team during the complete event.

This covers an area of 50 tatami + safety zone

Individual randori events are divided into

Choosing categories is depending on:

Referees and judges are not allowed to enter in an event they are judging or refereeing.

Each randori contest shall be conducted by 1 Chief Referee and 2 Corner referees, with all three having the same right to judge victory, techniques,……

Where a difference of opinion occurs between the Referees during a contest a discussion will take place to resolve it. However, when a unanimous decision cannot be reached the Chief Referee will decide the issue.

The decision of the Referees Team is final. In case of complains, this has to be solved before “Hantei”

For both Individual and Team contests the Chief Referee shall present the tanto to the competitor wearing the red belt, who will be standing to the Chief Referees right on the contest area.

The Chief Referee shall receive the tanto (generally from the white belt competitor) before the decision has been awarded.

The Chief Referee shall control the contest using the commands of:

The 5-second rule if applicable.

When Toshu holds Tanto’s knife arm and Tanto braces his empty hand against Toshu while facing each other. The Chief Referee will call Yame after approximately five seconds.

When Toshu holds Tanto’s empty arm and Tanto braces his knife hand against Toshu. The Chief Referee will call Yame after approximately five seconds and give Shido (if applicable) to Toshu.

The Chief Referee must be careful to allow Toshu to persist with balance breaking attempts. Yame should only be called when there is no progress and Tanto is just blocking Toshu’s actions.

Please refer to the JAA rulebook for the explanation of the levels for awarding points of the waza. (Ippon, waza-ari and yuko)

Points are awarded as follows:

The competitor scoring the highest number of points shall be declared the winner.

Where the points are equal the competitor with the most Toshu points shall be declared the winner.

In the case of equal points and Toshu points, the decision will be given by the Chief Referee and the Corner Referees based on superiority, taking into account recognisable differences in skill and effectiveness of techniques and attitude during the contest. (extension is permitted if applicable).

If the match is stopped early on and the uninjured competitor has fewer points than the injured player “hikiwake” is given. If late in the match then the one with the most points is declared the winner. (This depend on the responsibility of the Chief Referee).

If both competitors are injured and unable to continue due to injury, the opponent in the next match is the winner by Fusenkachi.

Where an injury is attributable to the action of a player he will be penalised with Hansokumake.

When a competitor has won a match by Hansokumake but is unable to continue due to injury, the opponent in the next match is the winner by Fusenkachi.

The following are intended as a guide to the awarding of penalties for prohibited acts:

The purpose of a particular kata can vary just as we can describe kata in different ways.

Find here the most popular definitions of Tomiki Aikido kata.

In other traditional Japanese martial arts we can find many kata for the same purposes as above. The point to remember is that one kata can be used or described in all of the above ways and therefore the many different interpretations of a particular kata.

Whatever your approach to kata, the basic principles are at the core of each kata and cannot be denied.

The passing on of the principles is the primary job of the Sensei. The teacher cannot pass on every existing techniques even if Sensei is aware of all the techniques from the system. By teaching the principles, Sensei will equip you with the means for finding out much more than just a choreography of techniques.

Unfortunately the present trend is toward learning a sequence of waza rather than just trying to figure out and utilise the basic principles involved. The innate spirit of a kata as well as the principles is intended to be demonstrating and must be known and understood. By practising correctly and thus improving your kata, you will also find that your randori improves and your understanding of Aikido in general is enhanced.

Kata like many Aikido activities is a paired exercise where both parties have to play their role.

Aikido can be translated as the “Way of Harmony” but in general terms that does not mean that Uke must let Tori win particularly if Tori does not deserve to succeed. Harmony in Aikido sense means a blending of roles, uke as attacker and finally the vanquished and Tori the victor.

In kata that means each player must know his role and how it should be played, the performers must also know the place of that role in the overall pattern of the kata.

The person playing the role of Uke must attack swiftly and have the intention to attack. In such a scenario, Tori will understand the truth of an attack and therefore can defend himself in the appropriate manner.

The judging of Kata & Enbu

Basically there are 2 ways for judging kata & enbu

This method was used when kata & enbu competitions were introduced.

A score between 1.0 to 10.0 was given to every pair demonstrated their kata or enbu. The skill of the judges is extremely tested by this judging system.

Two pairs are demonstrating their kata and are judged by in 5 judges with red and white flag. When the Chief Judge called “Hantei”, all the judges are raising the flag, red or white. The majority of red or white is winning this bout.

The criteria for judging Kata and Enbu

Competitors advance to their spot on the contest area. Bowing to the table with Officials after a command by the Chief Judge, they turn to their opponent, Uke to Uke and Tori to Tori. Turning to face the partner.

At he command of the Chief Judge, competitors bow and start their demonstration.

After both pairs finished their demonstratio, Chief Judge called “hantei’, all 5 judges raise red or white flag immediately to determine their choice. Chief Judge calls the flags of the 5 judges. Majority of the flags is called after the command “kachi”.

The bowing sequence is a reverse of the beginning. 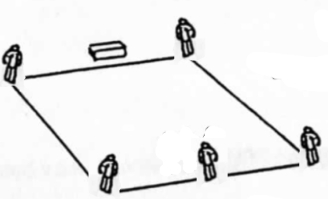 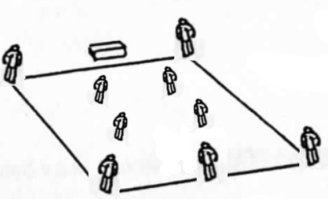 In case of the flag method 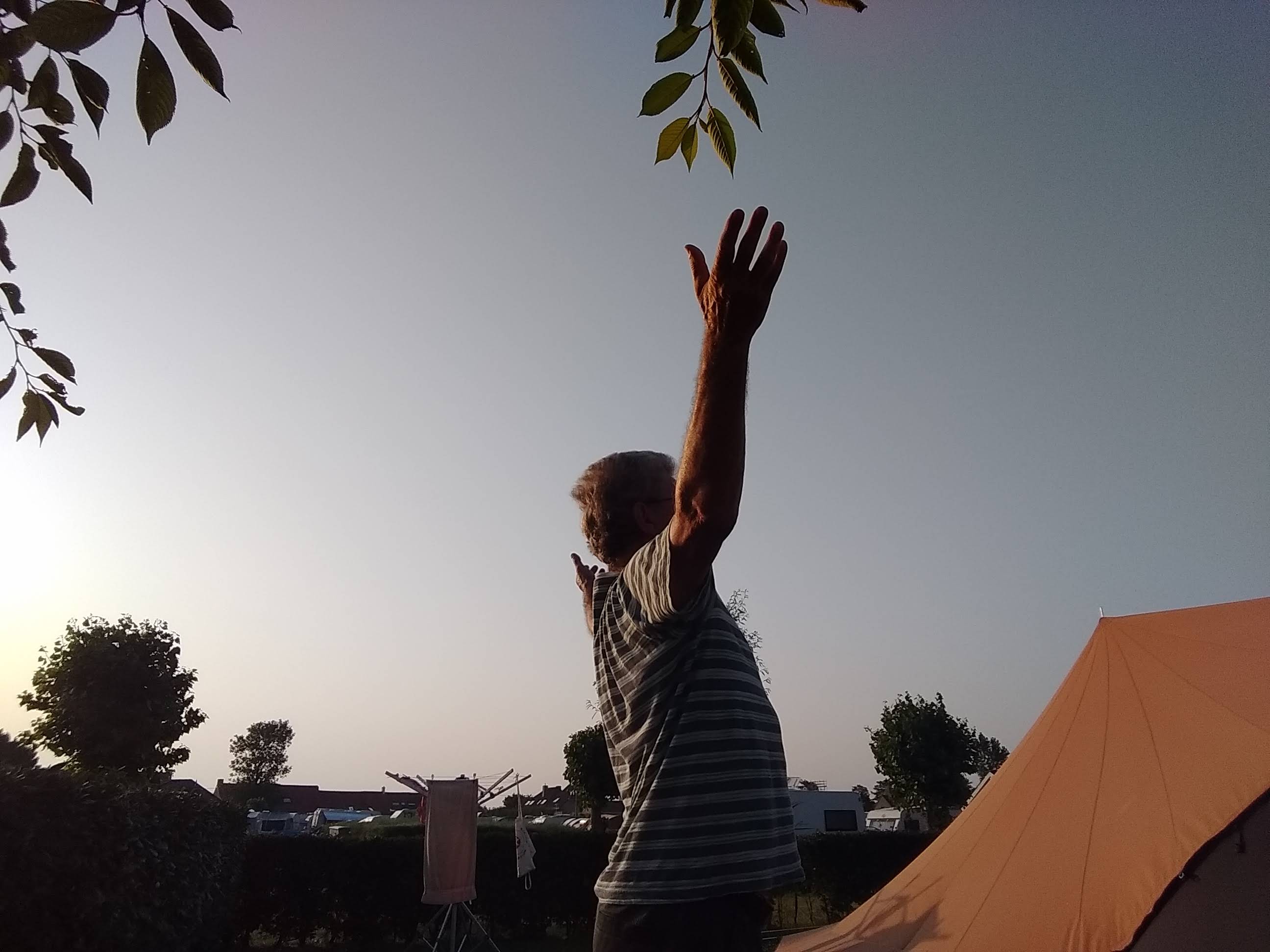 “none of the authors, contributors, administrators, or anyone else connected with Study Group Tomiki Aikido or Shobubukai and affiliated groups, in any way whatsoever, can be responsible for your use of the information contained in or linked from these web pages or blog posts”