There is an interesting aspect connected to the fighting position of Tomiki Aikido method. In randori no kata, Tori always stands with his right foot in front: migi-gamae. The same applies for Uke. Of course this situation applies for right-handed persons.

But where does the systematic use of the right-sided position, migi-gamae, come from?
First of all we have to understand that randori no kata do not represent a boxing attitude to the fighting situation. We are dealing with classical bujutsu, especially Japanese fencing, kenjutsu. The swordsman always puts his right leg in front. In western boxing or Japanese karate a right-handed person in general takes the left stance. Some Tomiki Aikido competitors use this kamae also during their randori.
The basic kamae in randori no kata mimics that Tori and Uke have a sword in their hands. Randori no kata promotes the basic concepts of kenjutsu. These concepts are how to shift the body away from the line of attack (tai-sabaki) and keep a safe distance (rikakutaisei). There are 2 basic methods to step out of the attacking line.

The basic method to practise randori no kata is by using ai-gamae. Both perform a kamae with the right foot in front or with the left foot if the practise is focussing on left handed performance.

The exercise of tegatana awase (see on the left) can be practised with ai-gamae or gyaku-gamae. In gyaku-gamae, tori can put tegatana on the inside of uke’s arm or on the outside.

Touching the tegatana of the opponent is the starting of a waza while practising randori no kata. 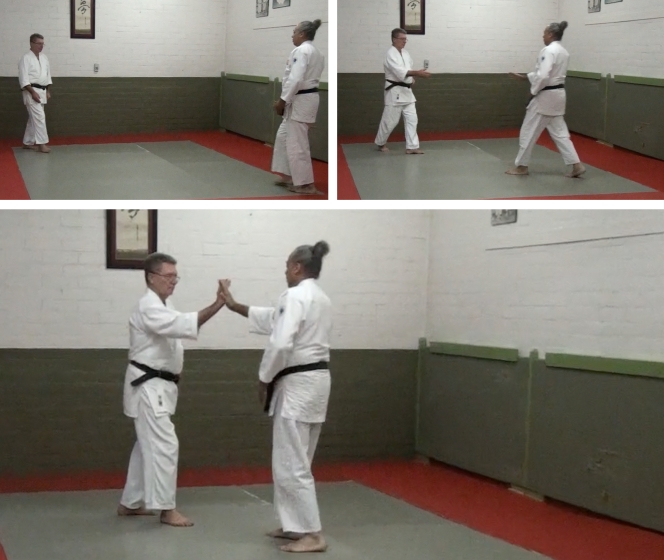 Using gyaku-hanmi in randori no kata

In basic 15 (randori no kata), the position of gyaku-gamae is used in to some “waza”. Gyaku-gamae-ate is such an example.

In the beginning of this article we stated: Tori always stands with his right foot in front: migi-gamae. Why is Tomiki sensei changing his posture to hidari-gamae? It is more logical if Uke is changing his posture, because this creates a training opportunity for Tori to practise against a left-handed attack. Of course we can practise randori-no-kata from a left-handed situation. But we cannot forget the origin of the right-handed posture: Japanese swordmanship.

The role of Uke

In randori-no kata, the role of Uke is an offensive one. Mind and body must reflect the intention to attack. When Uke lift his “tegatana” up and towards Tori, there must be an intention to attack. For training purposes, Uke can physically attack with shomen-uchi without lifting the hand to jodan posture.

The role of Tori

The role of Tori will depend on the action of Uke and can be performed according 3 specific situations:

As previously mentioned, tegatana-awase is the start of the physical performance of a waza. But it is also possible by “not touching” tegatana, Uke’s mind is of course offensive, there is no physical attack. The previous example of gyaku-gamae-ate is such a situation.

Mostly in tanto-randori no kata (basic 17) a specific kind of timing is used: go-no-sen. This means reactive timing. The opponent performs an attack and the defender reacts to this and deals with it with the help of a body shift with simultaneous a nagashi movement (sliding parry) followed by a counterattack. There are two rhythms connected to this timing. The rhythm can be one-two, for example in a case of aigamae-ate, or it can be one, which means that parry and counter attack are performed at the same time. Hiki-otoshi is such an example. 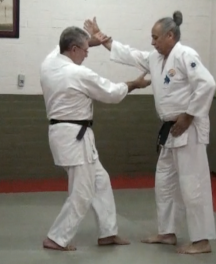 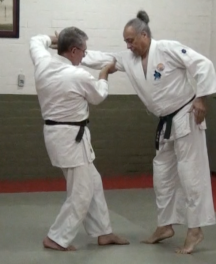 Can we use other timing situation in basic kata for randori (randori no kata)?

Sen-no-sen: This means simultaneous timing. This needs a different state of mind. Tori tries to sense the intention of the attacker and starts to move simultaneously with him. In Tanto-randori-no-kata, a sen-no-sen action can be used when a tanto-strike is at the beginning of the action.

Sensen-no-sen: This means pre-emptive timing and it is the most demanding to perform. To perform it correctly would mean that Tori should be able to feel the movement of Uke before it takes any physical movement. In Japanese budo there is lots of material to be found about this timing: to pre-emptive strike at the point when Uke is still planning his own attack. In this level you take the initiative when you sense the intention of the attack in the opponent’s mind or in his ki, as the Japanese say.

By changing posture and situation, we stimulate the creativity of the practitioners. And to make it more interesting, playing with 3 kinds of timing is multiplying your numbers of possible waza.

Next step is to use all your waza in randori (kakari geiko, hikitate geiko and randori geiko)