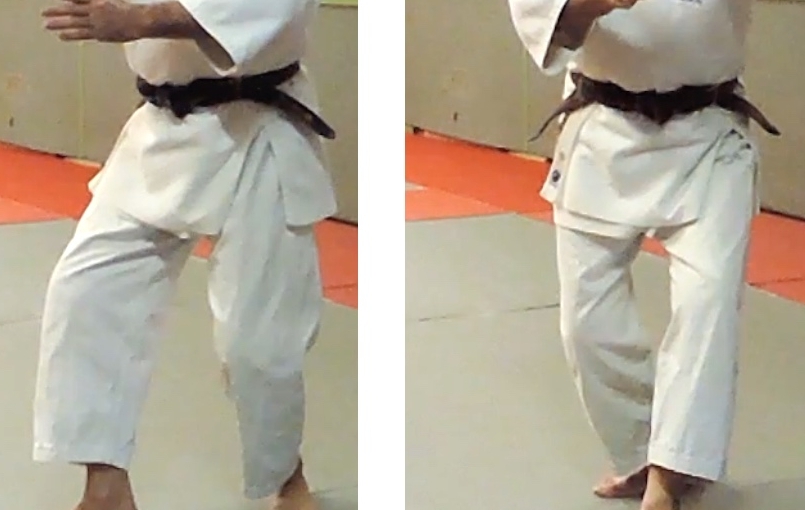 This is a sequel on “Aikidō: A Matrix Budō“. We will go deeper into the movements of the koshi, namely koshi mawari. The skill of koshi-mawari is practised at the first place with solo-exercises: tandoku undo.

There are many kind of postures. Each Budō form has his own postures. But there are elements which can be found in each Budō form. A good posture allows maximum efficiency in terms of time and space. Posture is not static, there are always movements in the body to adjust balance and preparation to generate power.

Posture based upon “chidori ashi” will give you a better efficiency in generating coiling or wrapping power (tenshikei). The engine for such kind of power is “koshi mawari” which can be translated as: turning koshi.

When koshi rotates, the opponent is dominated by this rhythm. He has to follow against his will. He experiences the defeat as a non-violent, pleasant experience. That is precisely why it means losing with a smile on your lip.

It must be borne in mind that the arms and legs together with koshi always form a unity of movements. This is called “rendo“.

Shizentai or neutral posture can be used as a meditative posture. It is also a posture to have the idea of “ready to start training”.

Shumoku or shimoku are 2 words for the same concept of foot position in an on-guard posture.

Shumoku originally the wooden bell hammer, a beam that is attached to Japanese bells at right angles. This way of stepping is frequently used with tsugi ashi or shuffle. Remark the 2 pattern: L-position and T-position. Both position will be used when hamni-gamae or sideway posture is adopted. The T-position is more convenient for hito-e-i posture, L-posture will give you a more slightly frontal posture. Sometimes, the front foot is slightly open? Although we speak about posture, we must understand the dynamics of this posture and the methods of changing positions in relation with oppponent.

Kenji Tomiki: It is good to wait in mugamae (shizentai) and to assume hanmi (shumoku ashi posture) as the opponent enters.

Feet position or stepping named after a bird of the same name (chidori=plover), the traces of which resemble those of the feet-position turned outwards.

The chidori foot position differs from the Shumoku position, the front foot is open. Shumoku is not very suitable for our koshi-mawari purposes. Chidori ashi is the perfect method to excellent in koshi-mawari

This posture gives an excellent opportunity to perform: “koshi-mawari”. Changing from shumoku ashi into chidori ashi is simple:

Shumoku ashi and chidori ashi can be used to perform unsoku-ho (foot movements).

Such a posture will be mostly used during “katachi” or “kata” performances. Bodyweight is more to the back foot. Under the heel of the front foot is an opening of about 1or 2 mm.

By assuming this posture, the performance of koshi-mawari will be much better.

Koshi-mawari can be performed at any time without a break, when your koshi is lowered sufficiently, with slightly springy knees. This makes it easier to react spontaneously to changes in any situation. If koshi does not lower in itself, so that one is only stiff and rock-solid, the chidori position cannot be performed. One speaks of a “lifeless”, that is to say an non-energetic position or a stiff kamae. Koshi-mawari and chidori are mutually dependent. If you fail to combine the koshi rotation with the chidor foot position, you run the risk of defeat.

So, we first adopt the chidori postion, let the koshi sink and perform koshi-mawari. Easy, isn’t it.

The term basically describes a lateral “opening” of the body, which, however, should not be confused with simply evading. The starting position is the left or right basic position. Koshi is now turning (without the upper body) in the opposite direction, which means that as soon as you release the resulting tension in the body and combine it with a small step, you come to a slightly laterally offset position next to the baseline without the movement jerky approach. A maximum 15 ° angling is enough to distance yourself from the opponent’s line of attack. It shouldn’t be any more so that the opponent cannot recognize it.
Hiraki uses the ball principle. A ball can rotate freely in a direction from a push or push, depending on the angle of impact, be it horizontally or vertically or in a combination of both directions also in a spiral shape.

Another name for tandoku undo is Taisabaki: the moving body.

All actions have to be seen as an implementation of the free moving body concept. Therefore, tandoku undo or taisabaki regarded as a free moving body movements, should never be neglected as it is a practice for acquiring the principle of yawara, jū or aiki.

Although tandoku undo or taisabaki do not yet result in any techniques, if you train the body in the way the koshi-mawari moves, this has a decisive advantage when it comes to performing specific waza (techniques).

It is a great challenge to integrate “koshi mawari” into Tandoku undo or Taisabaki. Basically the first step to do is integrating chidori ashi posture. Next step is to become familiar with koshi and tanden, the lower part of the central body. This is not easy and will take a few years to become aware.

Koshi mawari is not about turning the hips, there is much more going on. As a reminder, it should be repeated again: in Budō it is very important that the movements are smooth and flexible (yawara). It is best achieved on the basis of the koshi-mawari, i.e. freely rotatable koshi. There is no other way to succeed than to acquire these flowing, spherical, horizontal and vertical rotations. The way there just leads over taisabaki.

The perfect handling of the sword is produced by the integration of three elements: the rotation of koshi (koshi-mawari), diagonal tension produced by this rotation and displacement of the body.

Traditionally, displacement in tandoku undo is done in a straight line forward. In relation with an opponent, this is of course a mistake. There are basically 3 mistakes (no koshi-turn, left and right koshi-turn without displacement) when considering the integration of koshi into tandoku undo.

To avoid such mistakes, moving slightly of the central line is a solution.

Integration of such an evasion makes the exercise much more difficult. Students have to think in the beginners-phase on many things.

The moving off the central line when introducing foot displacements can be done later when student understand tegatana and koshi movements (see again Morita Monjuro advice about using koshi and diagonal tension).

When integrating koshi-mawari into tandoku undo – tegatana no godosa, some adjustements has to be done. Koshi-mawari is often mentioned in explanations, but it is not often seen in demonstrations of katachi, kata or randori.

How to perform a “simple” koshi-mawari

Originally, Tomiki sensei introduced 5 methods to use tegatana. Those movements are integrated into tandoku undo taisabaki. When introducing the student into the 5 methods with the help of tandoku undo taisabaki, we can start without the foot displacement for tandoku 1 to 3. The integration of koshi maware together with the tegatana movements will be in such a case much more easier.

Practising tandoku undo 1 can be done in 2 ways

An example without displacement and turning footwork:

An example with displacement:

Shōmen-uchi, striking with tegatana from above or from below to the center line of the opponent.

There are different methods to practise.

Use koshi-mawari when preparing for a strike. This is creating a kind of tension in the body (tenshikei) and can be used as spiral power.

This tandoku undo has many purposes and can be called a multi-purpose skill. Basically there are 3 kinds of skill:

A lightness of the body, a feeling of complete weightlessness, hovering sensation of the body that is established by koshi-mawari.

When we practise with our without a partners, we must always be ready to use both legs or feet to move. The skill of taijū no dendō is putting the weight in the koshi, not in the legs or feet. If the weight is in the koshi and we move with koshi-mawari and/or unsoku, a feeling of weightlessness will fill the body. An eventually partner will feel almost nothing and his bodyweight will dropp into the floor. Of course if he has the same skill, a different game has to be played. This game is called: hyoshi.