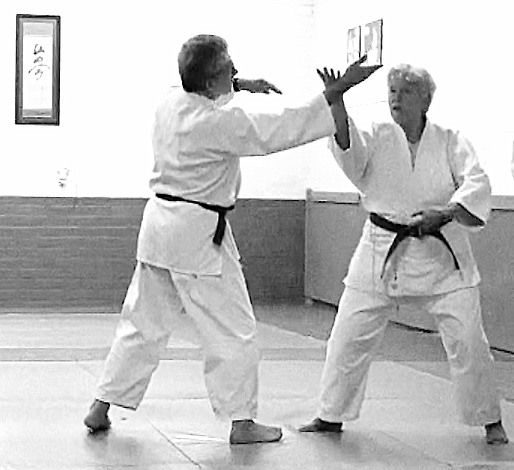 Author: Eddy Wolput °1948 – 7th dan Aikido (JAA-Tokyo/Japan) – 5th dan Iaido – 5th dan Jodo.
Part of the material in this article is not directly linked to the Japan Aikido Association (NPO) program or Shodokan approach. Other concepts are incorporated into the study of the subject presented.

When studying martial arts, basic skills are required to apply effective skills in both combat and martial arts. Asian countries have many methods of self-protection based on martial traditions. Nonetheless, there are significant differences in the training methods used by the traditional Japanese and Chinese exhibitors.

In traditional Japanese arts, one develops from learning kata. These kata are categorized into various categories. The basic movement patterns that form the basis of art, the so-called omote-waza and deeper knowledge via ura-waza. Of course, it’s a simplified explanation of Japan’s traditional martial arts.

Contemporary Japanese martial arts borrowed elements from Chinese martial arts. Western ideas regarding training concepts have also influenced Japanese budo.
The idea behind the basic techniques was explicitly conceptualized by the Chinese martial arts. Basic training consists of exercises designed to develop specific skills, fitness and endurance. Concentrating on the Yao or lower abdomen is in fact an art in itself and must be mastered above all sparring is involved. These important foundation skills are sometimes exported as watered down martial arts to non-Asian countries (America, Europe,…). For example the very popular slowmotion version of Yang-taichichuan versus the dynamic powerfull Chen-taichichuan.

When studying kata, you will certainly notice the words “omote” and “ura”. Sometimes the expression omote-waza is used to name the kata explained to beginners or novices in the art.

Omote techniques are taught to beginner and are techniques considered less effective in combat. The view to the outside world is important, but speaking from a strategy point of view, the efficiency is not so high. Students are learning the basic movements of the art.

Ura techniques are more effective in the sense that they are build on a strong “omote” foundation. Basically ura waza are considered as secret techniques. But in fact, the secret is in the total control of the body movements. Without this control, you will not perform efficiently during randori.

The fundamental difference lies in the pedagogical approach. Chinese arts promote a strong mind and body before any attempt to enter sparring. Chinese arts include some exercises with a sparring flavor, like tuishou or pushing hands.

Chinese martial arts are much longer in history than Japanese martial arts. Like most martial arts, the origin lies in the techniques and strategy of the military forces. Warrior monks, of course, affect the development of martial methods.
In the late 19th century, martial arts also became popular among civilians and created numerous methods as a sort of self-protection.

The same evolution can be seen from the development of Bujutsu and Japanese Budo. The ancient martial arts, also known as Koryu Bujutsu, were mostly practiced by samurai. When the Samurai class was abolished, certain methods became popular as civilian methods mostly called Jujutsu and Kodokan Judo. A few sword methods have become popular as Kendo. The military government was surely a major sponsor of the Kendo method.

Kenji Tomiki wrote some papers on the evolution of Bujutsu to Budo.

The method of practise traditionally used to ensure the safety of dangerous techniques was the kata system of practise. In ancient bujutsu, 99% of a practise was completed by kata alone. That is to say, in order to cope with an opponent’s unlimited attacks, each response was practised by means of kata. That is the reason for the extreme number of kata in ancient jujutsu. For example in Tenjin Shinyo Ryu jujutsu there were 124 kata techniques, and there were over 10 ranho (literally unstructured captures). To become masterful in the practical applications of the techniques required innumerable months. Then someone would be challenged to go from kata to a violent shiai (literally street fight ) called tsujinage or tsujigiri. This gave life to kata and was the place to try to fit together objectively one’s own real ability.

On jujutsu and his modernisation -Kenji Tomiki

Tuishou (Chinese: 推手), often translated as pushing hands, is a popular two-person exercise among Chinese internal martial art practitioners. It is the essential complement to learning bare-handed sequences and also prepares you for combat without rules.

Although we are talking about pushing hands, tuishou is considered a basic training tool to improve partner/opponent’s body listening. Besides listening to the body (energy), other basic skills like accepting power, using power and correct footwork are studied during tuishou.

Chokei, the skill of listening

If you listen to a piece of music and that music touches you, the world around you is no more, there is only music. The art of listening is a part of you and you must enable this ability to accomplish its task. Your mind is there, but your mind’s not interfering with the music.
You realise that music is a sort of energy, traveling like a sound wave. If you can feel the different vibrations of the music, it must be possible to feel or to listen to the vibrations of opponents energy. You must come into contact with it without interfering with your ego.

When you practice with a partner, the “Chokei” skill is always the first task to complete. Unfortunately, our ego, especially blocks this skill. We believe that we can manage the opponent’s action with actions developed in our mind.
Chokei gives you the information you need to answer the actions of the partner: the opponent. The art of listening without the interference of the ego is a principal part of the training in addition to the skills of the movements of the martial body.

A basic practice method to understand ma-ai “distance” from the opponent. The tegatana of two practitioners are matched in contact and they move freely while maintaining the correct distance.

Tegatana awase is considered a basic exercise in Tomiki Aikido and promotes basic requirement for efficient aikido practic.
But tegatana awase can be seen in a much broader sense than the classical exercise promoted by the Tomiki Aikido system.
Chokei or the skill of listening to the partner/opponent’ energy is in fact an integral component of tegatana awase.
This is what can be considered as a bridge between aikido and tuishu. Both methods depend on your sensitivity.

How can one develop sensitivity?
During tegatana awase, the two practitioners have another role to play. One is active and the other is passive.
Active role: Move forward, backward or sideways without intent to push or pull. It’s only the energy that comes from the footwork.
Passive role: Move in line with the partner’s energy. No resistance or active role is to be performed. It’s all about feeling the energy.

Moving freely around during tegatana awase can be seen as the start of “randori” or “sparring”. Subsequently wrist grabbing can be introduced while keeping correct distance and efficient power use when grasping.
Next, the introduction of “kuzushi” or balance disturning will add the opportunity to apply techniques or waza.

Of course we can start from other situations to perform sotai renshu and study chokei, ma-ai, kuzushi and other important concept of Tomiki Aikido