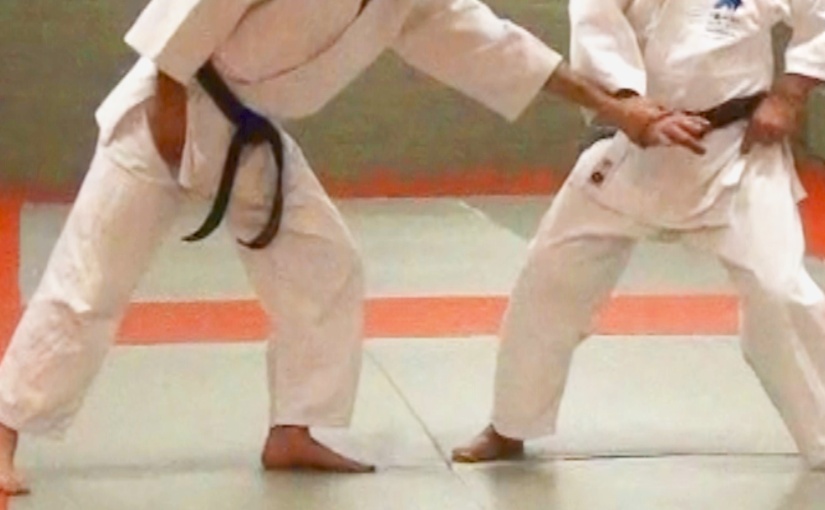 Martial arts use body motions that are not always comparable to normal life movements. Aikido is no exception.
Human movements naturally depend on the physical laws of our environment, for example gravity.
Of course, human movements are actually quite a complex system. Martial arts moves should follow nature’s rules and something more. I’ll try to explain that a bit further.

The motion of a solid object

The motion of an object is described in two modes: the trajectory of its centre of mass and the rotation around an axis in its center of mass.

The motion of the human body

The human body is a very complex system, it is a framework of segments linked to each other by flexible bands (muscles, tendons…).

To control the body, many skills are necessary to carry out effective movements.

The human body distinguishes two kinds of motion, comparable to the trajectory and rotation mode of an object.
Both modes operate side by side and due to the frame construction a rotary mode is always present during body movements.

Looking at the Aikido demonstrations, you will notice many unnecessary displacements. A troubled mind is the cause of such errors and resulting in inefficient body movements or techniques. Of course, if you practise with a too cooperative partner, a beautiful show can be given with a lot of jumping.
Making your Aikido more efficient by using effective movements should be your objective.

An important characteristic of Aikido’s movements is its spiral trajectory. But this is not unique to Aikido, other martial arts make the same human movements less or more because of the structure of human body. An efficient system of connected segments is required and this is needed to control the actions of an opponent, especially if the opponent is very heavy or strong.
The use and control of power is a vital condition for surviving a confrontation.

3 important components with each an independent role has to act as a set to create the full body movement.

The example above deals with the action of the legs. The force generated by the legs, supported by the floor, passes through the torso to the arms and further into the target.
The legs do not only flex and stretch, but use a spiral movement. The koshi (bottom of the back) controls the legs. The torso spins lightly using the waist. The arm movement is based upon the basic arm movements of Tomiki Aikido.

Testing without falling down.

Even when you are not moving, you should maintain a strong posture. You are ready to act in a split-second. You can only do that if you have a calm mind.

By adopting the mugamae, it is not your intention to fight. You don’t offer, for instance, your wrist. Your eyes look at someone in front of you, but you don’t see an attacker. You notice his intention and when the intention becomes physical, you move.

Physical skills are required for effective movements or techniques. Of the many areas of body expertise, there are certainly two that are important.
Of course, other skills are also important, but those two skills are fundamental to the moving and non-moving martial arts body.

Dropping the bodyweight is performed by bending or folding the “koshi”.
Bending the knees is the result of the koshi folding.

Dropping the bodyweight is needed for using the koshi.

Open and close the koshi area

Open and close of the koshi is a very difficult action. The whole body is following the opening and closing of the koshi.
Don’t activily turn the knees.

Open and close the koshi area is important when you push or pull. The koshi is the key to efficient movements with the “hara”.