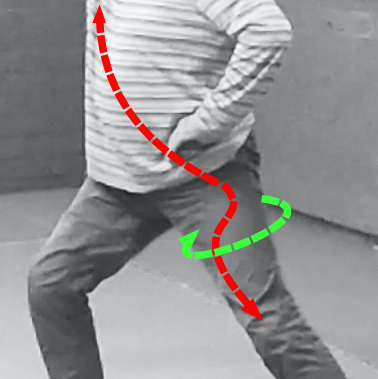 Tenshikei is the Japanese term for chanshijin or silk reeling, a skill in Internal Chinese martial arts. The name derives from the twisting and spiralling movements of the silkworm as it wraps itself in its cocoon and the pulling off the silk from the cocoon. The body is imitating this by winding and unwinding movements. In a Western context, reference is made to “fascial movement”.

What is fascial movement?
Fascia training describes sports activities and movement exercises that attempt to improve the functional properties of the muscular connective tissues in the human body, such as tendons, ligaments, joint capsules………

Tenshikei uses the diagonal tension and releasing of the muscles and tendons in the body and can be regarded as fascial movement.
Kyokotsu or lower part of the breastbone, as a control centre of the tenshikei movement, uses the tanden, koshi and yōbu as the stability platform. Seen from a Western perspective, the pelvic girdle is synonymous for this important body region.

The pelvic girdle or “koshi” can be seen as the origin of power generation and it has to harmonise with the rest of the body to produce efficient movements. Unfortunately, when the focus is too much on the koshi, there is a tendency to freeze this area. To avoid this situation, focus on the kyokotsu is advisable.

In humans, the crotch is the bottom of the pelvis, the region of the body where the legs join the torso, and is often considered to include the groin and genitals. In our study of efficient movement, reference has to be made to the area around the hip-joint. It can also be defined as the lower part of the pelvic girdle.

Relationship between shoulders and hips

The upper (above the waist) and lower (below the waist) portions of the torso should move in harmony with each other, so the hips and shoulders need to move in conjunction with each other in order to maximize power. The final position for a given movement will often involve the shoulders being directly over the hips as this alignment optimises the strength of the torso. The waist area needs to be strong and flexible for power to be generated in this way, so the waist should be loose and relaxed.

Whether the upper or lower half of the body initiates the movement is not always the same. As an example we can look at “uchi mawashi” movement. Diagonal tension is a main factor in this movement. Hip joint(s) or mata opens and closes in synchronising with the shoulder(s).

Synchronising has been not always at the same time. We have to consider the concept of rendo. The art of linking is a skill to transfer power through the body which will increase the efficiency of the movement.

Relationship between elbows and knees

Relationship between hands and feet

There is the belief that “the foot and the weapon arrive together”. This usually refers to an attack connecting with its target as the practitioner comes into the correct distance to attack.

In reality a tiny (microsecond) delay between the placement of the foot and the attack can occur. The hand should never lead the foot. All movements should flow outwards from the practitioner’s centre to the hands and feet. The hips and shoulders drive the knees and elbows, which in turn, drive the hands and feet. All the movements have to stay in the area of “range of motion”. This area is slightly smaller than the area of peripheral vision.

Solo exercises are performed in the area “range of motion”. The arms are not passing outside this area, otherwise the body structure will be destroyed and power generation is disturbed. The same is true when doing partner exercises, don’t move outside your range of motion.

In Tomiki’s syllabus, 7-hon-no-kuzushi is a tool to improve the skill of “kuzushi”. A method to disturb the opponent’s balance.

Mostly, these exercises are performed with a partner gripping a wrist or both. These skills are executed by moving the arm(s) in accordance with the proper footwork. The use of “mata” is hardly discussed and using efficiently koshi, tanden or yobu are almost forgotten.

The movements of these exercises are based upon “tegatana no go dosa”, the original handblade solo-exercises developed by Kenji Tomiki. By simplifying basic movements, some of the “internal” content is lost. The reason of this loss can be found in the purpose of tandoku undo tegatana dosa. Modern tegatana dosa is used to teach big groups and give the practitioners a simple basic idea of the movements. In the past, university students were taught this set of exercises during their 3 or 4 years of study and focus of the training was on “randori”, a kind of sparring. Of course, after spreading the art of Kenji Tomiki for a broader public outside the Universities, the search for other aspects than randori become more important.

The original purpose of kata was to teach external and internal concepts of the martial to the practitioners. This is already discussed in other posts at this blog. The difference between kata and katachi is bringing forward different aspects of the formal training in a martial art.

7-hon-no-kuzushi (omote & ura) is a formal exercise found in koryu-no-kata dai yon. Originally, these exercises were taught as a tool to improve “kuzushi” or balance disturbing.

By omitting some of the internal aspect during the performance of tegatana dosa, the content of 7-hon-no-kuzushi became also simplified and abstracted. The focus is on a kind of balance disturbances, mainly inspired by judo kuzushi of Kodokan Judo. The external concept of “kuzushi” is dominant. The internal aspect, especially the winding and unwinding is not highlighted.

After studying thoroughly “tegatana dosa”, the internal skill of winding and unwinding becomes a familiar one and can be used efficiently in all the partner exercises.

For all of these methods, the momentum needs to flow freely between the shoulders and hips. The torso needs to undulate in order for power to travel unimpeded throughout the entire body. The final position for a given movement will often involve the shoulders being directly over the hips as this alignment optimises the strength of the torso. The waist area needs to be strong and flexible for power to be generated in this way, so the waist should be loose and relaxed. It is often seen in partner exercises, the shoulders have contracted as a result of using the shoulder muscles as the source of power used by the hand and arm.

Mata is the connection between the leg and koshi. This connection is also influencing the passing of energy from the ground to the arm and hand. Using koshi and hara is an internal aspect to produce power needed in the art of kuzushi and has to be introduced into 7-hon-no-kuzushi.